Have you ever used the phrase “clean bill of health” or “he knows the ropes” to describe someone? Perhaps at one point in time you had someone “show his true colors.” Maybe, you were even “bamboozled” a time or two? It is likely that you have either used or heard these phrases at some point in time and you are not alone in that respect. These phrases are just a few examples of common Navy Sailor terminology or metaphors that have made a lasting influence on our everyday speech and conversations.

“Down the hatch” Perhaps you’ve heard a parent use this phrase when you were young and had to take some foul tasting medicine. They might say, “down the hatch” and down the medicine went!

For Navy Sailors, the phrase i has quite a different meaning. It is believed this phrase’s origin deals with lowering cargo into a ship’s hatch (the part that holds and secures cargo). Cargo would be lowered down the hatch and secured prior to departure.

“Clean bill of health” When this phrase is used today it might refer to someone or something passing an inspection without any issues or problems. For instance, perhaps you took your family pet for his annual check-up. The veterinarian will do an examination and, ideally, would give the pet  a “clean bill of health” should everything look fine.

In the Navy, however, Sailors associated this phrase to a document that would be issued to a ship showing that its port of departure did not suffer from any contagious infections, viruses, or diseases that could easily be spread along the ship’s journey.

“Knows the ropes” When someone “knows the ropes,” the individual is typically very experienced, is the one to answer questions, or understands overall how certain things should run or operate. According to the Naval History and Heritage Command, this phrase was included on a sailor’s discharge papers to “indicate that he knew the names and primary uses of the main ropes on board a ship.” 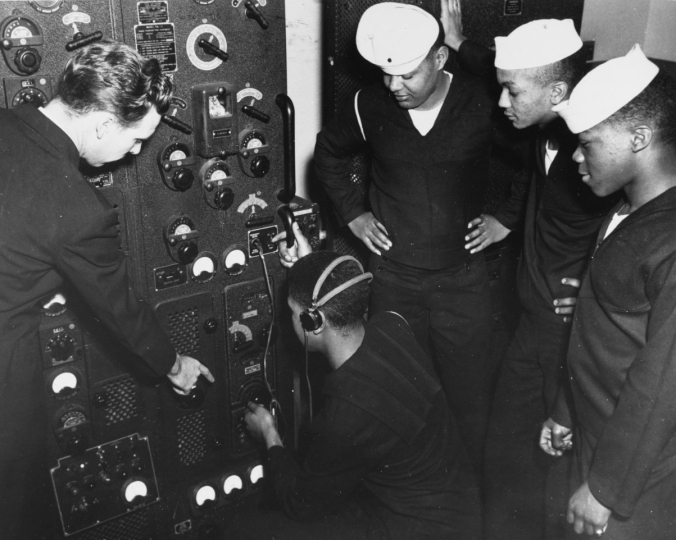 “Shows his true colors” Often when someone “shows his/her true colors” it generally means they’ve been hiding their true self through illusions and deception. You wouldn’t typically use this phrase to describe someone in a positive way.

In the 1700s early warships would obtain flags from various nations, often with varying levels of influence, to keep aboard their ships. When approaching an enemy or unknown vessel, warships might raise a flag from a neutral powered country to trick (or bamboozle) the other vessel into showing their “true colors.” At this point in time, “rules of civilized warfare [would call] for all ships to hoist their true national ensigns before firing a shot.”

“Took the wind out of his sails” This phrase is often used when someone is let down or lost their confidence and excitement. For instance, it “took the wind out of [their] sails” when the baseball team’s best player got injured right before the championship game.

Taking the wind out of someone’s sails was an early battle maneuver used by warships. To prevent an enemy ship from advancing, a warship would position themselves on the “windward” side of the enemy (the direction from which the wind is blowing) to essentially take the wind that would have otherwise propelled the enemy’s sails.

The U.S. Frigate United States is shown here, in an engraving by Benjamin Tanner, “taking the wind out of the sails” of the H.B.M. Macedonian.

“Bamboozled” Today, to be “bamboozled” means you have been tricked or duped into believing something is true or accurate. You would use this phrase when an individual has been the victim of an innocent joke: “I was bamboozled when they told me it was a costume party. When I showed up, I was the only one dressed like a clown!”

Historically, however, this Navy phrase connects closely when a vessel “shows his true colors.” Early warships might be “bamboozled” into believing the country origin of an unknown vessel based on the flag they are flying. It was not until it was often too late that they realized the ship was dishonest.

Navy slag even makes headlines, like this headline of a November 24, 1948 article in the Chicago Sun Times

The next time you’re using a phrase or metaphor to complete a thought, perhaps consider where it might have come from or if it has another meaning. The next time you feel as though someone “took the wind out of your sails” or warn your kids to send some medicine “down the hatch” you’ll stop and think twice. Perhaps maybe there is a bit more sailor in you than you thought!