By 1970, NASA accomplished two lunar landings with the Apollo 11 and 12 missions. Those missions touched down in two of the easier lunar landing spots where the terrain was flat and friendly “…to a geologist they’re a snooze- miles and miles of rocks and dust, all made of the same stuff and roughly the same age”. Apollo 13 was going to be different and challenge the astronauts and ground crews in ways unimagined.

According to NASA, “If you really wanted good booty, you’ve got to head for the lunar hills”.  The landing zone for Apollo 13 is known as Fra Mauro, “…a stretch of rugged, Appalachian-type mounds”. In this zone, landing would be much more difficult but yield exciting specimens for scientific study. On April 11, 1970, the famed Apollo 13 (AS-508) mission launched from Kennedy Space Center, Florida destined for Fra Mauro. Apollo 13 would be NASA’s third lunar landing mission. For Spacecraft Commander Captain Jim Lovell, it was his fourth trip to space and Lovell’s first time walking on the surface of the moon. Captain Jim Lovell was highly trained and more than capable of commanding the mission. Lovell graduated from the United States Naval Academy in 1952 and quickly rose through the ranks during his training in Navy flight school and then as a test pilot. In October 1962, NASA selected Captain Lovell to be part of the second group of astronauts. Captain Lovell was excited to finally step foot on the moon and Apollo 13 was his big opportunity. 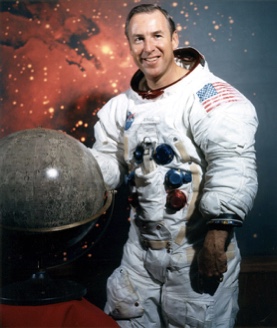 Apollo 13 launched with little to no problems and the crew, consisting of Captain Lovell, Command Module Pilot (CMP) John Swigert and Lunar Module Pilot (LMP) Fred Haise settled in and prepared their craft for the much-anticipated lunar landing. Nearly fifty-six hours into their mission on April 13th, the crew hosted a live television broadcast showing the American public life in zero gravity and the inside of the spacecraft. Captain Lovell signed off, “This is the crew of Apollo 13 wishing everybody there a nice evening, and we’re just about ready to close out our inspection of Aquarius and get back for a pleasant evening in Odyssey. Good night”. Before going to bed Lovell, Haise and Swigert began to perform routine duties and mechanical checks of the craft.

At 9:08 PM, just nine minutes after the broadcast ended and 200,000 miles from Earth, a series of events occurred that led to the abortion of the lunar landing mission and the end of Captain Lovell’s dream of a moonwalk. During the checks, ground control instructed CMP Jack Swigert to stir the oxygen tanks. Unbeknownst to Swigert, oxygen tank No. 2 exploded and resulted in a catastrophic failure of both oxygen tanks 1 and 2. This explosion led to loss of electricity, light and water to the command module known as Odyssey.

Initially, Captain Lovell and Haise assumed that Swigert pulled a prank on the crew, which he often did by knocking on various parts of Odyssey to spook them. To the crews horror, it quickly became evident the explosion they heard was no joke. Captain Lovell saw gas venting out into space and uttered to ground control, “Houston we’ve had a problem here” a line made famous by Tom Hanks in the 1995 film Apollo 13. Rather than panic, Lovell used his naval training, remained calm and collected, and focused on fixing the problem. The crew quickly realized that they were running out of oxygen and that the landing module- Aquarius was going to be their lifeboat until able to power Odyssey back up and reenter the atmosphere.

The crew had to conserve as much power, water and oxygen as possible to make the trip back home. With no power, the spacecraft quickly cooled to  around 38 degrees Fahrenheit. Dangerously high carbon dioxide levels also threatened the crew and condensation from the men’s breath soaked the cabin walls. Lovell clearly remembers during the descent to Earth “The droplets furnished one sensation as we decelerated in the atmosphere: it rained inside the CM”.

Even though the mission did not achieve its main objectives, Apollo 13 is a successful failure because all three of the crew returned to Earth alive and in good spirits. Apollo 13 made reentry on April 17, 1970 near Samoa. The crew was picked up by the USS Iwo Jima (LPH-2) within an hour of splashdown in the Pacific. Reflecting on the Apollo 13 mission, Captain Lovell said, “I had the good fortune of working alongside a team of people- on the ground and in space- whose initiative, ingenuity, innovation and teamwork resolved the many life-threatening problems we were having on board providing me with the opportunity to be here today”.