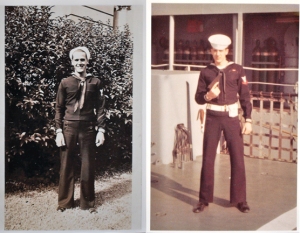 There might be nothing more traditional in the Navy than the dress blue uniform.  There have been subtle changes to the uniform over the years, but the essential style has remained the same.

This tradition gets personal for Charles and Geoffrey Bender, father and son who both served in the U.S. Navy.  While 30 years separate their service, they both wore the same uniform – yes, literally the same uniform.  When Geoffrey donated the uniform to the museum in 2013, he included details about how the uniform was worn and modified by his father, Charles, before Geoffrey himself wore it 30 years later.

The stitching on the uniform was added by Charles.

Charles Bender (1917-1984) enlisted in the U.S. Navy as an Apprentice Seaman in August, 1938.  After attending boot camp at Newport, RI, Charles served on several ships and other duty stations.  Of note, he was part of the Color Guard at the 1939 World’s Fair in New York.  During his service, Charles modified his Navy-issued uniform by adding colorful stitching to the inside of his jumper and trousers.  This was not regulation.  But many Sailors during this time added to their “liberty” uniforms – that is, the uniforms they wore while on liberty because civilian clothing was not allowed.  Charles received an Honorable Discharge from the Navy in 1945 as a Shipfitter First Class.

When his son, Geoffrey, enlisted in the Navy in 1968, Charles gave him his old Navy dress blue uniform.  Geoffrey attended boot camp at Great Lakes, IL and later served aboard the USS Basilone (DD-824).  Following in his father’s footsteps, Geoffrey further modified the uniform by adding liberty cuffs.  He also added a hidden side zipper (also non-regulation) to make the jumper easier to pull on and off.  Geoffrey received an Honorable Discharge as a Fire Control Technician (Guns) Second Class in 1974.

Tradition runs deep in the Navy, and in the Bender family.  Do you have any “artifacts” that have been passed down and used by multiple generations of your family?

To see this uniform on exhibit, visit the National Museum of the American Sailor and view our exhibit Colorful Characters: Sailors, Tailors, and Unique Navy Uniforms.

Editor’s Note: The Colorful Characters exhibit closed in March of 2017.