Every artifact in a museum’s collection tells a story. Many of those stories are famous. But some of the most interesting ones are lesser-known and require a little research. So, after NMAS received a service medal for the Second Nicaraguan Campaign as a donation, I went looking for its story.

The United States Navy awarded the Second Nicaraguan Campaign Medal to Sailors and Marines who served in Nicaragua from 1926-1933. The medal depicts Columbia defending two other figures with a sword and cloak. Facts about the medal are easy to find, but they didn’t answer my questions. What was going on in Nicaragua? Why the U.S. Navy was interested in this Central American country? 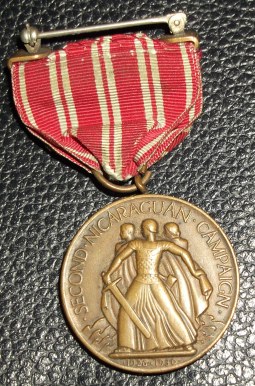 I kept digging and found that Nicaragua had gone through a civil war, with U.S. intervention, in 1912. A small number of U.S. Marines remained to protect American interests in the country. In particular, the U.S. sought the right to build a canal connecting the Atlantic and Pacific. The Panama Canal had already been completed, so the U.S. didn’t need another canal. But Japan and Germany were both interested in building a Nicaraguan canal. So the U.S. was simply trying to keep Nicaragua under their influence. It worked, though not without angering many Nicaraguans.

After an election brought a coalition government to power, the United States decided it was safe to leave in 1925. But they returned the following year when a coup d’état by the Conservative Party removed the democratically elected government, resulting in a rebellion by the Liberal Party.

The United States refused to recognize the new government. At the same time, the U.S. was also concerned because Mexico was supplying the Nicaraguan rebels with weapons. Thus, American Sailors and Marines were sent to occupy Nicaragua’s ports to establish neutral zones and push the fighting inland. The Navy also used these neutral zones to protect American citizens and refugees.

With the help of the United States, the Conservatives and Liberals agreed to the Peace of Tipitapa in 1927. However, despite the official end of the war, some Liberals refused to recognize the treaty. They waged a guerrilla fight against U.S. occupation and the Nicaraguan National Guard.  The U.S. withdrew in 1933, after a series of fair Nicaraguan elections and because of the unpopularity of the Nicaraguan intervention back home.

An artifact’s story not only leads us to learn about history; it also teaches us about the people who made or used those artifacts – what was important to them and why. They make the past come alive by serving as concrete reminders of a particular time and place. Do you have any “artifacts” that serve as reminders of your own personal heritage – something that belonged to a parent, grandparent, aunt, or uncle?

To learn more about the museum’s collections check out our website.