When I first started working at the museum, I would bring my dog Benny to the base with me after work and we would go for walks along Pettibone Creek.  Quite often during our walks we would run into sailors.  They always wanted to play with Benny, especially when he was a puppy.  Without fail, they would tell me about their pets  “back home.”

During  World War I at Great Lakes, sailors didn’t have that problem.  While they didn’t have their own pets, the base was home to a “Ravinetta” park in Camp Dewey (where Recruit Training Command’s Camp Porter is located today).  In “Ravinetta” park, along with park benches, flowers and miniature ships, was an actual zoo. 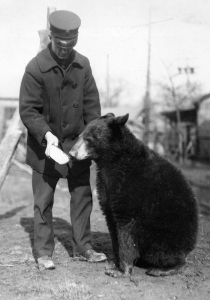 Great Lakes’s  zoo started when the Officer In Command was presented with two big brown bears, John and Susie, and eventually grew to include four bears, deer, three American eagles, mountain goats, badgers, rabbits, ferrets, owls, guinea pigs, a possum, and a hawk.  If that wasn’t enough for the sailors, they could also pet one of the many dogs belonging to the staff or visit the Aviation Camp to see the carrier pigeons.

While the zoo/Ravinetta Park was dismantled in the post-war downsizing, during its brief existence it served as means of entertainment for sailors and their families stationed at the base.

Interested in hearing more about food and culinary specialists in the Navy? Check out these NMAS blog articles: Pigeons: Not Just Air Rats and E-3 Cindy.