Sailor’s Attic has dug up some interesting things that used to belong to U.S. Navy Sailors – a football, a jersey, some snapshots, a written account of an adventure. Sure, these things are interesting. But how do these items become “historical” and end up in the archives of the National Museum of the American Sailor?

Sometimes, it’s the most ordinary items that grab our attention. One Sailor, a yeoman aboard the USS McCormick (DD-223) and the USS Black Hawk (AD-9) took advantage of his access to a typewriter and a camera to record his observations from 1924-1926. The Sailor, Fred Verrillo, gives a hint how something personal becomes historical – and how the museum’s archival collection benefits from donations.

He recorded the ordinary experiences of daily life in the Navy. In June, 1925, his ship docked at the U.S. Navy’s summer base for the Pacific (“Asiatic”) Fleet, the Chinese port city of Chefoo (now Yantai), near the Korean peninsula. 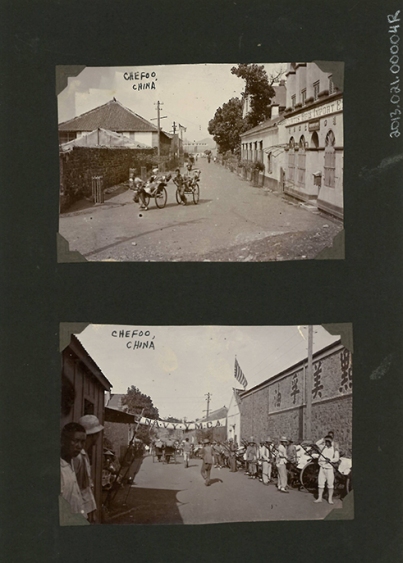 Fred Verrillo also used his camera to freeze in time what he saw that day on the streets of Chefoo. (Note the “Navy Y.M.C.A.” banner, mentioned in his log.)

Sometimes, though, a Sailor gets caught up in a storm of larger events. Only with the passage of time does something like “internal trouble” in Shanghai in June, 1925 become “the May Thirtieth Movement,” a series of student-led protests throughout China during 1925-1926 that were sparked by a Shanghai police shooting of peaceful marchers on May 30, 1925.

Yeoman Verrillo and his ship then traveled to Ningpo, where Chinese and French Roman Catholic priests hosted the sailors for Mass and a Sunday outdoor party.

Yeoman Fred Verrillo wrote that his “log” did not “expect a place in the Library of Congress or the Hall of Fame.” But nearly 90 years after Fred Verrillo stepped off a Navy ship for the last time, one of his relatives recognized the value of his unvarnished storytelling and discussed donating the materials with the staff of the National Museum of the American Sailor.

Know of a collection of archival documents that might fill in more stories about U.S. Navy enlisted personnel from 1775 to the recent past – from the Mediterranean Sea or the African coastal waters in the 1950s-1960s, or from a Sailor of the 1800s?

The museum has a large collection of World War I and World War II artifacts and is working to increase our post World War II collection. To learn more about the museum’s collections, visit the Historical Collections and Research page on our website.